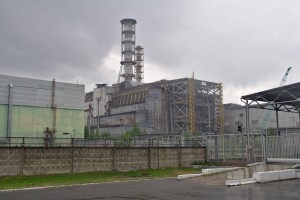 Tour Leader Jim Gill led a group of intrepid travellers to Ukraine and beyond in 2013. This is his report of their sobering and fascinating visit to Chernobyl and Pripyat.

As ‘alternative’ day trips go, there are surely few in the world that can match this one. We have driven, by choice, 100km out of Kiev – the beautiful Ukrainian capital – to the site of the world’s worst nuclear disaster. Chernobyl. Its mere mention still sends a chill through the body, in much the same way as do India’s Bhopal or the German death camps of Auschwitz and Dachau. On 26 April, 1986, the lid blew off Reactor 4 at the V.I. Lenin Nuclear Power Station in the Ukrainian countryside, spewing plumes of deadly radioactive gas into the atmosphere. The Russians – for Ukraine was still part of the Soviet Union at the time – tried to play down the scale of the accident, and only admitted the catastrophe to the outside world when Swedish scientists detected dangerous levels of radiation in the skies above their country.

By that time the nearby city of Pripyat, specially built to house the nuclear plant’s workers and their families, had been evacuated. Some 45,000 residents were given an hour’s notice to grab absolute essentials and were shipped out on 1000 buses. They were told it was a temporary measure and they would return in three days. They never went back.

Walking through the streets of Pripyat, 27 years later is an eerie and unsettling experience. It is a ghost town, its apartment blocks, schools, shops and hotels crumbling and overgrown with vegetation. We are not allowed into the buildings themselves as they are structurally unsafe, although we are told that they have long been stripped of anything saleable. Looters saw to that, decades ago, oblivious to the dangers of the then dangerously high levels of radiation.

We walk along a broken avenue, past a playground that once would have been full of boisterous happy children, even on the day after the accident, as, criminally, it took the authorities 36 hours to order the evacuation.
Around a corner we come to the most poignant sight of all – the abandoned amusement park, which was due to open just a few days after the disaster in time for the big May Day celebrations. The scene is almost surreal, as if we have stepped onto the set of a post-apocalyptic Hollywood movie. On the left is the dodgem car arcade, a rusted shell with a number of small, brightly painted bumper cars lying static, as if their drivers have just scampered away. 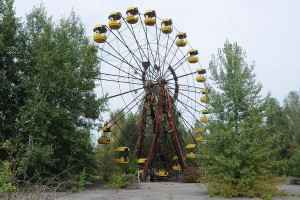 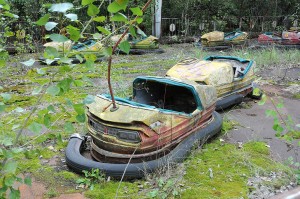 There’s a merry-go-round, which never turned, and next to it the ‘star attraction’, the giant Ferris wheel that also never operated and which, over the years, has become a kind of iconic image of this terribly sad place. The group I am with walks around Pripyat mostly in silence, trying to take in the enormity of what we are seeing. Nearly three decades after the explosion the earth is still too contaminated for anyone to live here, although a number of wild creatures appear to thrive, such as deer, wild boar, and wolves. Despite the dangers, and the fact a 30km exclusion zone is still enforced, some villagers have returned to live (illegally) in their old homes, many without power or proper sanitation, desperate to reclaim their former lives.

We are also taken to the actual site of the disaster and, from a distance of just 200m, stare almost disbelievingly at this familiar sight – the two tall chimneys emerging from the roof of the hastily constructed, and now badly corroding, vast sarcophagus. A few hundred metres to our right another massive convex structure is taking shape – a new sarcophagus, which will slip over the old one in the hope of preventing any radiation leaks for another few generations.

Keith Lokan, a retired radiation scientist from Adelaide who is in our group, tells us it is almost impossible to ascertain the exact scale of the disaster in terms of lives lost. He says it is a hard fact that the initial explosion killed two people, and 28 brave firefighters died within the first three months due to receiving lethal doses of radiation. Then it gets difficult to measure. Depending on whose figures you believe, anywhere between 25,000 and 100,000 of the 600,000 ‘liquidators’ who heroically cleared up the toxic mess may have died from diseases attributable to radiation.

Keith has reassuring news for us though, agreeing with the local authorities who have declared the area safe for tourists to visit, albeit in highly regulated and relatively short trips. Almost a week after our visit, and despite having since had our senses intoxicated by the magnificent cathedrals and grand mansions of Kiev, the chatter within our group is still all about Chernobyl. It has been a sobering, often sombre experience to match few others I can recall. Only my visits to the terrible concentration camps of Poland and Germany come close.

The visit to Chernobyl and Pripyat is a part of our Beyond the Black Sea tour.