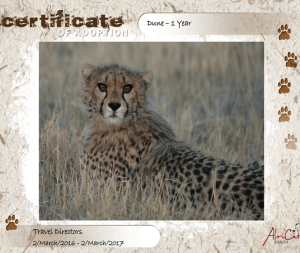 In today’s conservation-conscious world, leaving a small or minimal footprint on the environment is an important part of responsible travelling and tourism. Actively supporting local communities and conservation projects, goes one step further.

These days we are all very conscious of minimising any negative impact on the environment in the destinations we visit. This goes beyond correctly disposing of our litter – particularly those ubiquitous water bottles – and being aware of wildlife habitats and pristine wilderness areas. It is also about observing those ‘no go’ areas at historic sites – even if it does mean missing out on that perfect shot – and respecting local cultures and customs. We strive to leave the places we visit in the same shape as we found them, if not better.

Namibia is a shining example of an emerging African nation that prioritises conservation. Gaining independence from South Africa in 1990 – after a long guerrilla war – the former South West Africa is a large country consisting of ocean shores, savannas, floodplains and deserts, and a population of less than two million people. According to World Wide Fund for Nature (WWF), Namibia was the first African nation to incorporate protection of the environment into its constitution.

As a direct result, non-profit organisations and conservation groups have restored populations of lions, cheetahs and black rhino through various projects aimed at wildlife preservation, while supporting local farmers in the fight against protecting their cattle from predators.

One such organisation is the AfriCat Foundation at Okonjima, in the Waterberg region of central Namibia. Set in a 200 km² nature reserve, AfriCat provides a safe haven for large cats. Many were orphaned at a young age, left to develop and hone their hunting skills, and learn to become self-sustaining, which gives them the opportunity to return to their natural environment.

Dune is the newest member of the AfriCat Foundation – and also the newest member of Travel Directors’ family! She was found, together with her brother, in May 2015 close to Dune 7 near Walvis Bay. The two 4-5 months old cheetah cubs were severely dehydrated and in poor condition. Sadly, shortly after they were found, the male cub died due to starvation and dehydration. Luckily for Dune, she was rescued and sent to Okonjima, where her rehabilitation has begun, with the expectation that at some point in the next year or so, she will be released back into the wild.

Travel Directors’ are proud to be involved in Dune’s rehabilitation. By adopting her for a year, the AfriCat team can continue their good work.

Like all the other cheetahs at Okonjima, Dune wears a radio-trackable collar, and lives in a large fenced enclosure. She currently lives alone and human contact is restricted, to give her the best possible chance of returning to the wild.

On a recent visit to Namibia, Travel Directors’ small group was not able to see Dune, but they did see the significant work done at Okonjima where the large cats are rehabilitated to preserve their numbers. In another nearby enclosure, the group set out on foot, in the company of one of Okonjima’s experienced guides. They tracked a pair of cheetahs and observed them at close range. It was, by any measure, an extraordinary travel experience.

Not all the cheetahs in AfriCat’s care can be approached on foot due to their wild nature, while others will never be able to be released back into the wild due to their tamer demeanours. But the foundation strives to rehabilitate those cheetahs that have a chance of returning to their natural environment and surviving on their own. The others live out their days in large reserves that give them the semblance of being in the wild, whilst keeping them safe from other predators.

Our ‘Cool Cat’ Dune, is well on the way to learning how to hunt and survive, and will hopefully, one day become a part of Namibia’s free-roaming cheetah population.

A visit to Okonjima is one of the key highlights of Travel Directors’ Namibia: Masterpiece of Nature tour.