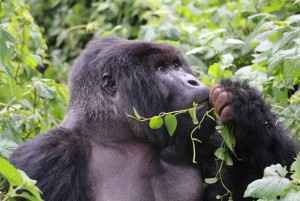 You may think you’ve seen and done it all when it comes to jet setting and sightseeing. You’ve climbed the Eiffel Tower, watched the sun set over Mt. Fuji, even gone on a festive sled ride through the frozen Russian tundra. However, one of the most meaningful and transformative travel experiences is being able to get up close and personal with a new environment, ecosystem, and culture—and what better way to do so than to come face to face with one of the rarest, most endangered creatures on the planet; one of our closest cousins, the mountain gorilla.

A close encounter with the magnificent mountain gorillas in Rwanda’s Virunga Mountains is a truly unforgettable experience. Whether you’re an animal lover, an aspiring zoologist, or just fascinated by these complex, remarkable creatures, the memory of coming face to face with a silverback or a frolicking juvenile is one that will remain with you long after you’ve hung up your muddy boots back at the hotel. There are only around 700 mountain gorillas left in the wild, and approximately one third of them live on the slopes of extinct volcanoes in Rwanda. As with human beings, strife and civil war in the region has taken a toll on gorilla numbers, not to mention the scourge of poaching. Few can say they’ve had the singular privilege of witnessing these animals in their natural habitat. No picture or video can compare to the sensation of standing in the presence of these powerful creatures, a feeling that sends a tingle down your spine—not through fear but from sheer wonder.

Rwanda: a Shining Example of Reconciliation

Rwanda emerged from relative obscurity roughly 20 years ago, when the horrendous massacre of around 800,000 people in less than three months focussed the world’s attention on this tiny African nation. A picturesque, land-locked country—and one of the most densely populated in Africa—Rwanda experienced one of the most rapid and brutal genocides in world history, putting it in the global spotlight for the worst of reasons. Under the leadership of President Paul Kagame, modern Rwanda is a shining example of man’s ability to forgive and set aside the past to ensure a prosperous and harmonious future for all. Ask any of the friendly locals you meet if they’re Hutu or Tutsi, and they will most likely answer, ‘Neither. I am Rwandan.’ “The Land of a Thousand Hills”, is a thriving, safe country with one of the lowest crime rates in Africa. Poaching is also out-lawed, with severe penalties for anyone found guilty.

Gorilla Trekking Comes at a Cost

It costs each individual trekker $750 USD to spend around 70 minutes amongst the mountain gorillas: that’s more than $10 per minute. It is expensive, but it’s most certainly worth it. There are 10 gorilla families roaming the slopes of the Virunga Mountains that receive visitors each day. Gorilla trekking is strictly controlled to protect the gorillas themselves, their natural habitat, and ensure the safety of the lucky eight people who make up each group of visitors. Expert trekkers, many of them former poachers who are now utterly committed to preserving these magnificent creatures, guide their group through the dense undergrowth in search of their designated family. The gorillas can cover a lot of ground in the course of a day—often moving as much as twenty kilometres, eating as they go, and resting occasionally before finally making their nest for the night. It is early in the day, when they are most active, that visitors set out to find them.

The gorilla group who played host to us was the Kwitonda family, and it took just over an hour of moderate trekking to reach them. The anticipation in the group was palpable; we kept our eyes peeled, proceeding carefully through the verdant undergrowth, remaining as silent as possible. There was something urgent and thrilling about not knowing when we would catch our first glimpse.

We spotted a baby first. Perhaps a few months old, this juvenile was sitting nonchalantly in a tree, casually stripping a small branch of its leaves and feeding them into its mouth. Nearby, its sibling was swinging from branch to branch in the same carefree way that human children play. We remained still, looking on in wonder as this remarkable demonstration of gorilla family life played out in front of us. For most of us, our only experience with wild animals had been in a zoo. Here, the gorillas moved with a freedom and exuberance that is simply impossible to witness in captivity.

Speaking in whispers, and with camera flashes disabled and sound muted, we were torn between viewing these amazing animals through the lens or in full panoramic vision with the naked eye. Then, a gentle rustle heralded the arrival of a mother. Her baby clutching around her broad neck, she appeared on the narrow path in front of us. Both regarded us for a moment, their brown eyes dark as pools. Though these animals are calm and peaceful, there was a split second where we all froze, a silent acknowledgment of the sheer majesty of these beasts. The mother paused, grabbed a branch from an overhanging tree, sat down and started to eat. Moments later, just as abruptly, she stood up and moved off.

Just when we thought it could not get any better than this, a massive silverback emerged from the undergrowth less than five metres from where we stood huddled in awe. At the pre-trek briefing, our guide and ranger had emphasised the importance of keeping a distance of at least seven metres from the gorillas, not making any sudden movements, and letting the animals have right of way at all times. So we stayed put, as the distance between us and big daddy got even smaller. Directing us to step back from the nearby path, our guides made a series of deep throaty noises, emulating the gorillas’ vocal patterns, and, clearly feeling he was amongst friends, the silverback ambled onto the track and moved right past us: he was so close we could almost have reached out and touched him.

Gorillas in the Mist

When our time was up, we reluctantly prepared to leave. It was hard to believe that we had followed in the footsteps of such legends as renowned broadcaster and naturalist, Sir David Attenborough, who made a BBC documentary of his legendary encounter with a family of gorillas in 1979, and Dian Fossey, whose quest to save the gorillas from poachers was immortalised in the film ‘Gorillas in the Mist’. Our encounter with these wild, yet somehow gentle animals, was without doubt one of the most remarkable experiences most of us had ever had—even if it doesn’t rate in Google’s 20 top travel experiences!