Feeling the Heat in Turkmenistan

Home/Blog/Feeling the Heat in Turkmenistan 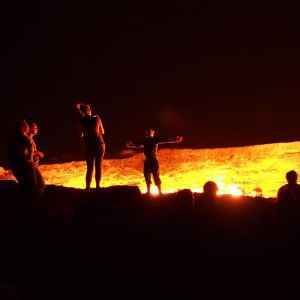 An intrepid group of Australians enjoy an exclusive dinner party in the Karakum Desert as the flames from the Darvaza gas crater warm the night air.

Few places on earth inspire the same kind of awe and wonder as Turkmenistan’s Door to Hell. Located in the heart of the Karakum Desert—a little over four hours from Turkmenistan’s capital, Ashgabat—the Darvaza Gas Crater has been blazing for almost half a century and shows no sign of stopping.

Despite its sinister name, the Door to Hell wasn’t formed by an apocalyptical event—at least, not in the traditional sense. In 1971, a group of Soviet petroleum geologists set out to explore the arid region in the centre of Turkmenistan, hoping to discover oil reserves. Believing they had located the oil fields, the scientists promptly erected a rig in the hopes of cashing in. Instead, they crashed in, altering the ecosystem of the Karakum Desert permanently.

While no official report has ever been released (leaving the true origins of the Door to Hell somewhat shrouded in mystery), it is commonly believed that the team inadvertently drilled into a large, cavernous pocket of natural gas opening up a giant sinkhole which swallowed the Soviet rig and drilling equipment and released large quantities of methane gas into the atmosphere. Though methane is non-toxic, it does reduce the amount of oxygen in the air, making it difficult to breathe. When animals in the region began to die, the scientists decided the best course of action was to burn off the excess gas. They assumed the fires would burn out of their own accord after several days. Forty four years later, the 70 metre wide, 20 metre deep crater continues to rage with magnificent, searing flames.

The fires burn at around 1000 degrees Celsius, though that didn’t stop Canadian explorer and environmental scholar George Kourounis from descending into the flames in 2013. Wearing a heat-reflective suit fashioned from aluminium, Kourounis would stay in the crater for up to 15 minutes at a time, gathering dirt samples for scientific analysis—samples which were later found to contain living bacterial organisms.

Drawn to the Fire

There’s something hypnotic about the Door to Hell. At night, the inferno can be seen from miles away, illuminating the desert’s barren waste with its fiery orange glow. Providing a source of both light and heat, the crater makes the perfect backdrop for an exclusive dinner party for those who venture to this remote region with adventure travel agency, Travel Directors. It goes without saying that travellers looking to bask in the glow of this singular phenomenon ought not to get too close to the edge – so dinner is definitely not of the barbeque variety! The operation to bring food to the table in such a remote place is slick and well-executed: old Russian trucks loaded with tents, sleeping bags, tables, chairs, drinks and dinner for the group, travel to Darvaza from Ashgabat, with an expert crew setting everything up in time for the group’s arrival. There’s nothing quite like arriving in the middle of nowhere to find tables draped in crisp white tablecloths and adorned with bottles of chilled beer, wines and soft drinks, and neat rows of tents within a short walk of a gaping, fiery hole in the ground. As dinner parties go, it is certainly different.

Tour leader, Tony Evans, who is also the mastermind behind Travel Directors’ escorted tours, was bowled over when he first visited the Darvaza gas crater on a research trip a couple of years ago. He knew as soon as he saw the crater that the visit here had to include an overnight stay.

‘The Darvaza gas crater is an amazing sight during the day, but after dark it is simply spectacular. But there’s not a hotel to be found for miles. So the dilemma was, did we have a long drive to Ashgabat late at night, or camp at the crater?’

The latter won the day and dinner and an overnight stay at Darvaza are now one of the major highlights of Travel Directors’ group tours to this amazing part of Central Asia. Definitely something to talk about around a more conventional dinner table back in Australia!

While You’re in the Area…

Nearby Ashgabat is a bustling urban city, with stunning and varied architecture. In 2013, the Guinness Book of Records recognized the city as having the most buildings constructed from white marble in the world. With its blend of modern and traditional Slavic styles, from the golden domes of the presidential palace to the unique and eye-catching Turkmenistan Tower, a 145-metre skyscraper containing a revolving restaurant, and emblazoned with the world’s largest image of the Star of Oguzkhan. The Palace of Happiness marriage registry office is also worth a look, as happy couples descend the stairs in the shadow of what looks to be a gigantic disco ball, surrounded by the same octagonal star.

While there seem to be no further plans to extinguish the fires of the Darvaza Crater, it may be wise to visit this bizarre and awe-inspiring environmental anomaly before the opportunity disappears. Travel Directors tour, The Five Stans, travels to Turkmenistan and offers adventurers the chance to witness this strange and compelling phenomenon for themselves. Visit soon, before the Door to Hell closes forever.