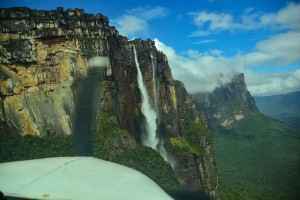 Travel Directors’ tour mastermind, Tony Evans, recently completed the research trip for our forthcoming, ‘South America: the Top End’ tour. With high expectations he set off last December to put the finishing touches to what he was confident would be an ‘out of this world’ tour. He was not disappointed. This is his report of what he discovered on that trip.

I am writing this in a cafe in the Venezuelan capital of Caracas. It is a bright sunny day with temperatures in the early 20s, and all around me I see calmness and delightful, friendly people milling around the streets. The coffee’s not bad either!

Picture Above: Angel Falls from the charter plane

I am back in my favourite continent, having just completed my research for Travel Directors’ latest adventure: ‘South America:The Top End’. I have rarely been so blown away by a research trip and I wanted to share my thoughts with you on what I know will be a wonderful and thrilling journey to a little-visited part of this great continent. It is rare for me to research a tour almost exactly a year ahead of departure, but with ‘the Top End’ I have been able to do just that, and now I’d like to share my excitement.

I landed in Cayenne in French Guiana. This is not actually a country in itself, but must be one of the most remarkable French territories in the world. Cayenne, the capital, contains some classic Creole architecture – but juxtaposed with this is the Ariane Space Centre, giving a surreal contrast. Deep inside the vast rainforest, Amerindians – many of whom have never seen a white man – watch as satellites are propelled into orbit. It is an incredible incongruity.

As if that wasn’t extraordinary enough, I then ventured to Devil’s Island, the notorious prison immortalised in Henri Charriere’s classic novel ‘Papillon’ and the subsequent movie starring Dustin Hoffman and Steve McQueen. Unspeakable atrocities occurred here and walking through the cells – now overgrown with tangled foliage – sent a chill down my spine. It is said that when the French set foot in South America they found paradise and turned it into hell. But today, thanks to the billions of euros generated by the satellite launches, French Guiana is the most affluent enclave on the continent.

Next I took a ferry across the mighty Maroni River to Suriname and the capital, Paramaribo. I had high expectations of South America’s smallest country and it did not fail to deliver. Here, an astonishing array of ethnicities and religions co-exist peacefully. Mosques, synagogues and Christian churches sit side-by-side amid the city’s wonderful centuries-old timber architecture. I was deeply affected by this glorious place, which seems to hark back to the Dutch golden age. 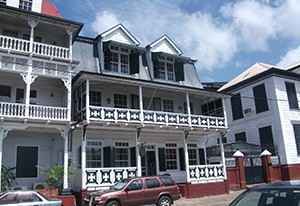 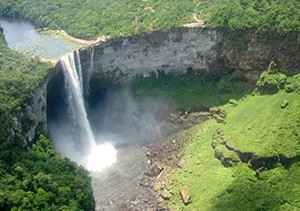 I arrived in Georgetown, Guyana, just as Prince Harry was leaving! Moreover, I was unaware of just how many British royals have visited the former British Guyana until I found myself in the same bedroom at the glorious Cara Lodge that Prince Charles had occupied earlier this year. All I can say is the heir to the British throne has good taste! This was my introduction to Guyana, a country of few roads, where nature has seemingly triumphed over man. The Amazon Jungle still rules here and communication is still reliant on the rivers and skilled light aircraft pilots.

One such pilot took me deep into the rainforest to the Iwokrama Lodge for an amazing two-day Amazon adventure. I saw the fabulous Kaieteur Falls, the world’s largest single-drop waterfall, along with an extraordinary array of wildlife. Howler monkeys provided my alarm clock at the lodge, which I loved – a charming, rustic building run by a gentle and welcoming staff. Imagine my astonishment then, to discover the lodge has Wifi!

Next stop was Trinidad where I was immediately swept up by the beat of the Caribbean. A happy people inhabit a gorgeous island that provided two major highlights for me. The first was watching thousands of scarlet Ibis – the national bird – spreading their wings at sunset and turning the island into a giant Christmas tree: a truly magnificent sight. The second highlight was Tobago. My local guide told me that if we did not visit Tobago we would not have turned the page on the islands. He was right. I was convinced I had to add an extra day to the itinerary in order to visit Trinidad’s neighbor – a sparkling Caribbean gem. A short flight from Trinidad took me to Caracas, the capital of Venezuela, and I was immediately reminded of Rio de Janeiro. I explored the downtown area and as I mentioned at the start, I discovered a city full of friendly, elegant and well-dressed people. I found some great restaurants and our hotel, the Renaissance, is brilliantly located with splendid views to the sea and mountains. 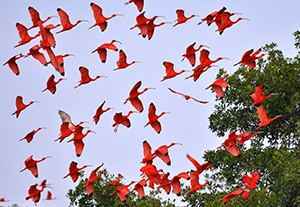 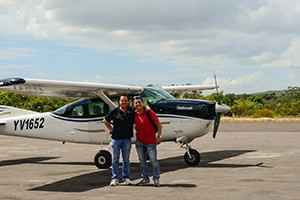 Leaving Caracas behind I took a charter flight to Canaima, my base for exploring the Angel Falls, and was overwhelmed by the accommodation – the wonderful Waku Lodge. Situated on a lagoon, two waterfalls create a sublime soundtrack to lull guests to sleep. Add to that the sounds of the lodge’s toucans, parrots and macaws and you have a little piece of paradise.

As for the Angel Falls themselves, I can only describe my trip as astonishing. Not only the great cascade of the world’s highest falls, but the unearthly rock formations and incredible isolation which combine to produce a true wonder of nature. It takes a lot to impress this old traveller these days but all I can say is my jaw is still hanging!

I could go on and on as there are many, many more highlights. But I hope this has given you at least a flavour of what I know will be a magnificent addition to Travel Directors’ growing tour portfolio.